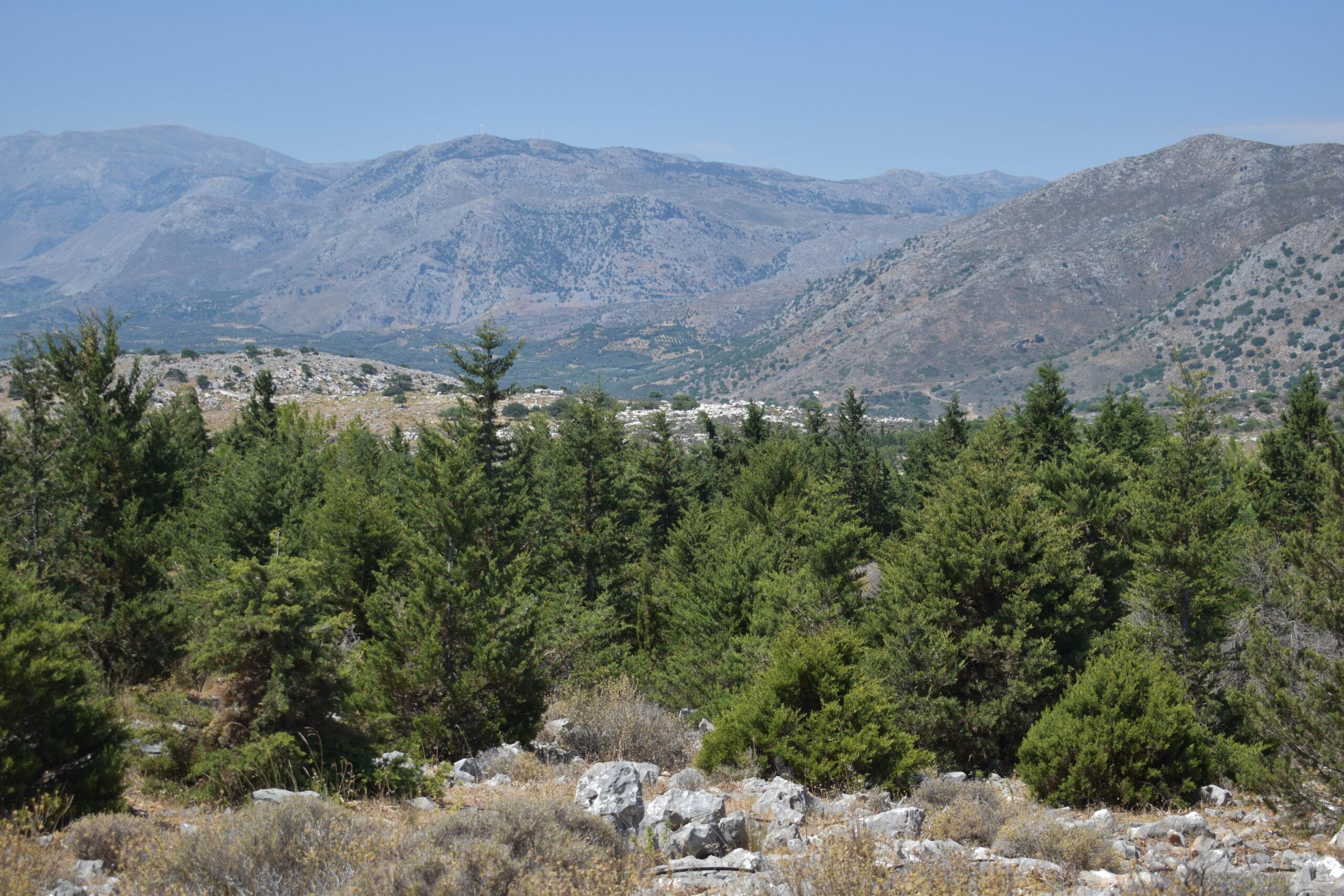 REACT4MED kicks-off with a field trip at Keri Forest

Afforested in the late 1990s, Keri Forest covers today about 3 km2 and is located 9 km West of Heraklion, Crete, Greece, at an altitude of 340 m, at the foot of Mount Strouboulas. From the South, Keri overlooks Voulismeno Aloni, a famous geological sinkhole formation. Voulismeno Aloni, which in Greek stands for depressed threshing floor, has been formed by the collapse of a former cave ceiling in the Tripoli limestone, forming a circular karst doline that reaches 90 m in diameter and from 15 to 50 m in depth (Figure 1). The location belongs to the Psiloritis Natural Park which is part of the European Geoparks Network and the UNESCO Global Geoparks Network. From the east, Keri afforestation overlooks the city of Heraklion, providing a panoramic view like no other.

Keri was placed under protection status for the first time in 1969 (Code name ΚΑΖ K705), when Ministerial Decision 16234/992/1969 designated an area of 15 km2 as permanent Wildlife Refuge for protecting wildlife from hunting and foraging. In 2015 (Decision 2477/2015 of the General Secretariat of the Prefecture of Crete), the Forest Directorate of Heraklion succeeded in expanding the protected area to 18 km2 and ratified its mapping (Figure 3). The Wildlife Refuge status forbids hunting, capturing of wild animals, collecting wild flora, and any destruction of natural vegetation zones. Within the protected area, competent authorities may implement restoration actions aiming to improve ecosystem services. Today the forest is multifunctional, serving as a green lung of the city of Heraklion, halting land degradation and erosion, offering opportunities for recreation as well as upgraded ecosystems services such as provisioning for a small number of ruminants, birds, and beekeeping.

During 1990-1995 the Forest Directorate of Heraklion planted the area with 180.000 plants, consisting mainly of pine (Pinus sp.; Figure 4) and cypress trees (Cupressus sempervirens; Figure 5), also including other typical Mediterranean flora such as carob trees (Ceratonia siliqua). In the early stages of afforestation, the area became a bone of contention among stakeholders, as the previous pasture land-use had to be largely abandoned to allow vegetation to establish. Later the area was characterized as an Olea and Ceratonia forest habitat under Directive 92/43/EEC (on the conservation of natural habitats and of wild fauna and flora). This habitat, which is characteristic of Crete, constitutes of a climax (steady state) forest dominated by Olea europaea var sylvestris, Ceratonia siliqua, and Pistacia lentiscus.

Despite the success of the afforestation project and the wide range of ecosystem services provided as a result, the forest of Keri is in danger, since the fires that occur in the area are frequent (e.g., 4/2019, 9/2021 11/2021 as reported in the news – Figure 6), with the most recent events occurring in June 22 and 28, 2022. Forces of the Hellenic Civil Protection (Ministry of Climate Crisis and Civil Protection, General Secretariat of Civil Protection, which issues daily fire risk prediction maps as in Figure 7, Fire Service, Forestry Service, Municipality, and volunteers) are always alert to keep the Forest pristine condition.

The scientists of PRIMA REACT4MED, an international project dealing with ecosystem restoration in the Mediterranean, happed to visit Keri Forest as part of their kick-off meeting on the same day as one of the recent wildfires occurred. Greek Partners of REACT4MED from the Laboratory of Natural Resources Management of Agricultural Engineering (NRMAE) of the Department of Agriculture of the Hellenic Mediterranean University, who also coordinate the project, had the opportunity to survey the aftermath of the fire and locate the ignition point using a drone (Figure 8).

NRMAE specializes in the development of methodologies to quantify hydraulic properties and their change in porous media such as soils and hydroponic substrates. These properties are important for the determination of crop irrigation parameters but also to determine the capacity of the soil to absorb water rather than allowing direct runoff. The increase of ground cover and soil organic matter achieved by measures such as the restoration of Keri have a pronounced impact on the soil hydraulic and eventually the hydrologic response of the area, ensuring the sustainability of the landscape and the habitat, and thus serves as a lighthouse for REACT4MED. The quantification of these properties is crucial for the determination of the impact of wildfires on soil physicochemical characteristics controlling runoff and erosion in fire-affected areas, such as those studied by FIRElinks. NRMAE has a long experience in broad scale mapping of land management practices in relation to fire risk and fire damage but can also conduct rapid-response post-fire field surveys using a specialized mobile soil and vegetation laboratory and sampling equipment (Figure 9). The mobile laboratory allows NRMAE scientists quick and safe access and rapid measurement of physicochemical parameters in hard-to-reach forest and rural areas.

The PRIMA REACT4MED Project, entitled “Inclusive Outscaling of Agro-ecosystem Restoration ACTions of the Mediterranean”, is funded by the PRIMA Programme (Partnership for Research and Innovation in the Mediterranean Area), a European Union Programme supported by Horizon 2020, focused on building research and innovation capacities, and devising innovative solutions addressing critical problems in the fields of water management and agro-alimentary systems in the Mediterranean. The PRIMA REACT4MED consists of 11 partners (Universities, research institutes, and an SME) from countries cooperating with PRIMA (Greece, Italy, Germany, Cyprus, Israel, Spain, Morocco, Turkey, and Egypt) and has Pilot Areas in Troodos Mountains (CY), Heraklion (GR), Stornara and Tarra Apulia (IT), Cànyoles (ES), Merchouch (MO), Bethlehem of Galilee (IL), Menemen (TR), and Tamia (EG). The Project is coordinated by the Hellenic Mediterranean University, led by Prof. Dr. Thrassyvoulos Manios, Vice-Rector of HMU, and Dr. Ioannis Daliakopoulos, Assistant Professor at the Department of Agriculture of HMU. HMU team members also include Irene Christoforidi, PhD candidate at the Department of Agriculture of HMU and Head of Plant Production at the Experimental Farm of HMU and Dimitrios Papadimitriou, PhD candidate at the Agricultural University of Athens. For more information about the Project, please contact HMU (idaliak@hmu.gr) and the REACT4MED project (info@react4med.eu).